If a big phone with a big screen and a better stylus is what you’re looking for, the Samsung Galaxy Note 9may be just the right size.

The term “phablet” may have never been official, but it has been colloquially used to describe smartphones that have bigger and bigger displays. Samsung’s Note line kicked off this form factor back in 2012, and while the screens keep getting bigger, subsequent Note phones have been shrinking around the edges. The Note 9 is no different, though it borrows plenty from handsets that came before it.

All in the family

Line up those two phones alongside the Note 9, and the aesthetic differences are almost miniscule. One that immediately stands out, at least compared to the Note 8, is the fingerprint sensor in the back. Samsung smartly put it under the lens, helping avoid unnecessary smudges over the camera lens. It would’ve been nicer if it was set further down toward the middle of the back to create more space from the lens.

The back is all glass, which looks really sleek, while also being a fingerprint magnet. The dual camera setup is identical to the Galaxy S9+, right down to the mechanical aperture and 2x optical zoom lens. More on the camera later.

The processing power is augmented by a built-in water cooling system that helps keep the phone getting too hot. Yes, it’s true, there is actual water flowing inside the phone, albeit serving a singular purpose. Samsung wanted the phone to be a robust performer, and it certainly has the specs to do it. The 6GB of RAM is nice, and the 128GB of internal storage easy to feel comfortable with. Expanding that with the microSD slot only takes things higher.

Keeping the headphone jack will certainly make some users happy, as would the 4000mAh battery. Samsung cramming a larger battery into a Note phone may seem risky, but rigid testing appears to show the coast is clear. This phone won’t light up the wrong way.

Having tested so many Samsung phones since the company first adopted Android, I have seen its software overlay evolve. I’d personally like to see a more direct turn away from its own overlay, but nevertheless, it’s there and functions as well as you would expect.

Samsung’s interface does carry some consequences related to power in that faster processors handle it so much better. The Note 9 is about as smooth as it’s ever been, and it’s pretty noticeable all around. From simple navigation to media streaming and multitasking, the phone held up really well. I rarely ever noted anything that seemed off or shaky while using it all the time.

Having seen the same display before (resolution and aspect ratio, rather than size), there were no surprises there. Everything looked clean, vibrant and colourful. Objectively speaking, I find little reason anyone would have a problem looking at it.

Epic Games, who developed the megahit game, Fortnite, made a splash launching the beta on Android. The additional emphasis on the Note 9 included a player skin exclusive to the device. But the real story was in how fluid the game would feel playing on it. Despite being a gamer myself, I’m an admitted Fortnite novice, having only recently tried it.

Whether it’s Fortnite or another game, the Note 9 handled gameplay well, with little lag or framerate issues. Had Samsung used a 120Hz refresh rate, like the Razer Phone has, this phone would’ve hit a different plateau in that regard.

I noted (no pun intended) the Note 9’s new S Pen, and its increased functionality. Giving it Bluetooth Low Energy meant it could act as a remote shutter for the camera or control certain apps. Lasting 30 minutes or 200 clicks, only 40 seconds in its holster would fully charge it. I tested that out, and it’s accurate.

Its utility as something more than a writing utensil is what I found most interesting. I only sparingly used it to control music playback on the phone, where I could play, pause or skip a track with a simple click. It was with the camera that I got the most out of it.

I could lay the phone down on an angle or flat surface and snap pics clicking on the pen. In fact, I realized I could contort less by holding the phone and focusing with the same hand, while clicking the pen with the other. That way, I never had to fiddle with my thumb to press the shutter or volume button (which doubles as a shutter button). For selfies, be they solo or of the group variety, that kind of flexibility is welcome. 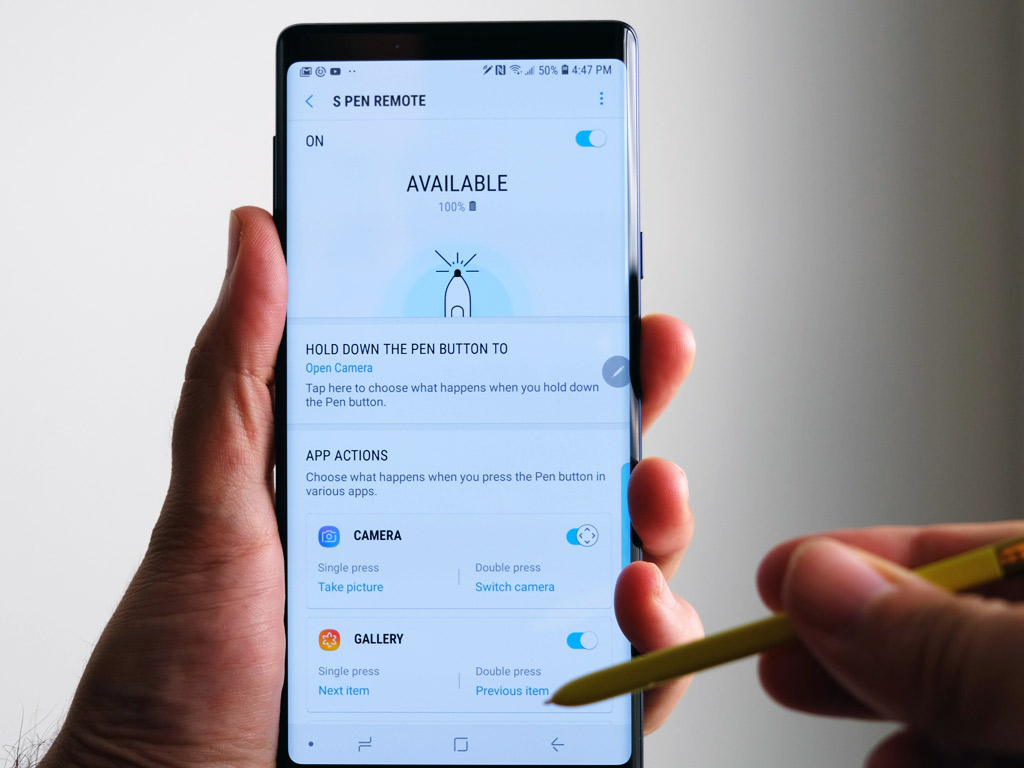 The pen has its own section under settings that offers some customization. Holding the button down can launch an app, albeit only those Samsung currently allows. If developers adopt this in any meaningful way, it could be an effective method to controlling certain apps. I’d certainly like to see more of it myself.

I was lukewarm to the fact the pen is yellow. It even writes in yellow after pulling it out and writing on the screen’s black canvas, otherwise called Screen Off Memo. Air Command is back, which is the pop-up menu that appears after you first remove the pen, or click the button when close to the screen. 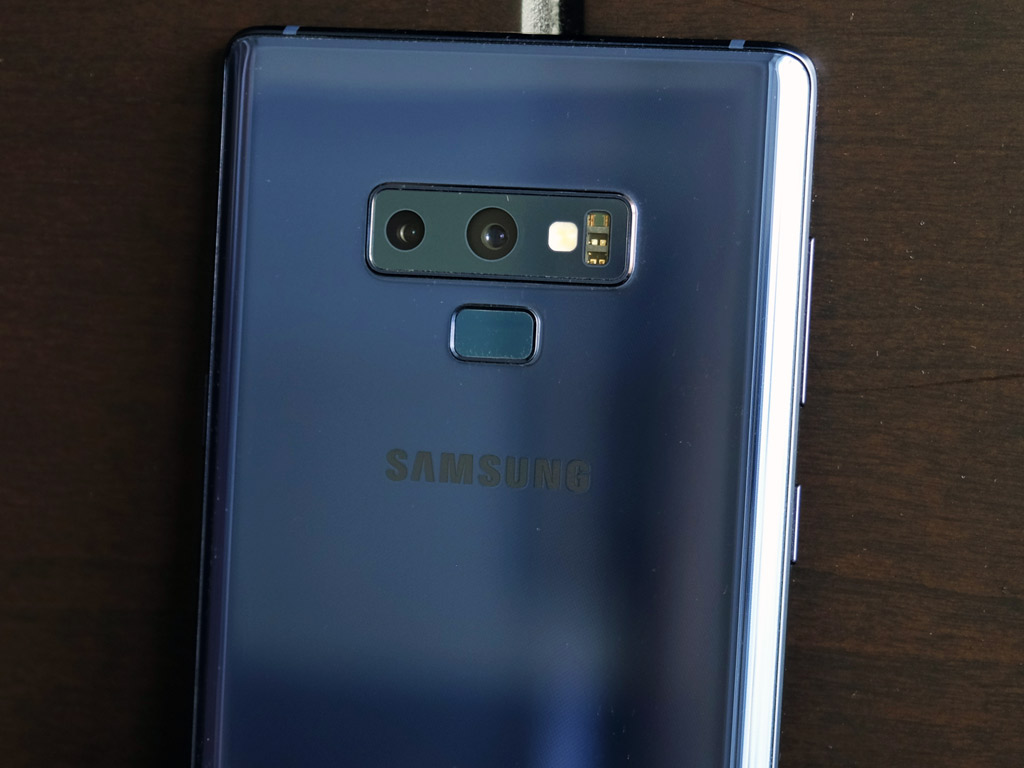 Samsung essentially just carved out the Galaxy S9+ camera and plopped it into the Note 9. One key software addition is called Scene Optimizer, which automatically adjusts settings based on the subject. It detects up to 20 different scenes, like food, beach, greenery, street, portrait and sunsets, among others.

It works decently, and can be useful if you need the helping hand. It’s just not dramatically better than other phones that do the same thing. The saving grace is the quality the camera produces to begin with. The Note 9 is an excellent shooter, capable of capturing great shots in a wide range of conditions and situations. Whether it’s people, action, night, low-light, scenery, architecture and animals, it impresses often.

The other software feature is a flaw detector, alerting you when someone has blinked or a shot is blurry. It’s not bad, but not as effective as I would’ve liked. Slight blurriness doesn’t always bring it up, and eyes have to be fully closed to trigger the blink detection.

I already mentioned the utility of the pen in shooting photos, finding it a neat way to be creative with angles. Clicking once snapped photos, and a double-click switched between the rear and front cameras. I eventually changed that so double-clicking recorded video instead.

I give Samsung credit in helping users understand and customize the voice assistant. It has its own menu layout and settings, and if you dive into it a bit, you realize the biggest strength is tapping into the phone’s own features. Telling it to snap a photo, take a screenshot or look up a restaurant is cool, and works well.

Using Quick Commands can create a sequential set of tasks that happen all at once. For example, saying “Hi Bixby, good night” will turn on ‘do not disturb,’ disable the Always On display and set an alarm for the set time.

Despite it all, Bixby is a work in progress. These features, while interesting, are still limited to the walled garden of Samsung’s own apps and phone settings. Google Assistant, which you can use on the Note 9, digs considerably deeper all around. Plus, to control smart home devices through Bixby, you need Samsung’s SmartThings hub first.

Samsung did announce a partnership with Spotify that would make the streaming giant’s library searchable by voice in a future update. That would be a good start.

With a screen this size, battery life is something to think about. I was surprised at how well the Note 9’s battery held up. Even with moderate to heavy usage, it lasted well over 12 hours with a solid chunk of life to spare. Maintaining a moderate screen brightness is a key factor, but so is the larger battery and software optimization.

It’s a noticeable difference over the Note 8, but not the Galaxy S9+. Though the latter had a slightly smaller battery, they are pretty close in output.

If you have the Note 8 or Galaxy S9+, there is no real need to upgrade to the Note 9. The phones are too similar to warrant taking that route. Anything older or less powerful, on the other hand, could warrant consideration. This is one of the most robust Android phones available. I would have liked to see it running Android 9.0 Pie out of the box, and here’s hoping it comes soon.

You also have to like the S Pen a lot. I’ve always said that about Note devices, and with screen size less of a differentiating factor over the S line, wielding that thing looms larger. For the first time, Samsung has made it a multifunctional accessory.

The Samsung Galaxy Note 9 is available now at Best Buy.

The Beauty of Life ~ Meno Lopes